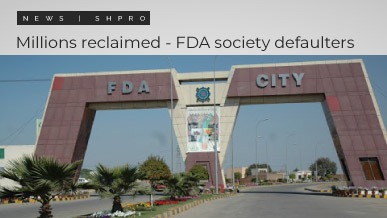 FAISALABAD – As reported by a news source, the Faisalabad Development Authority (FDA) announced on Thursday about its monetary recovery from defaulters.
In a meeting headed by FDA Director-General Muhammad Suhail Khawaja, the amount recovered was worth PKR 350 million and then subsequently spent on the development of FDA City. The DG conveyed his pleasure over this recovery and also revealed the cancellation of allotment letters previously assigned to all defaulters following the deadline mentioned on them.