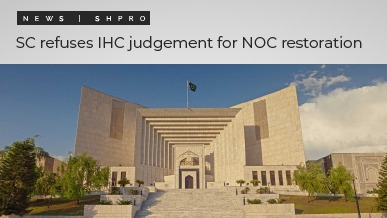 ISLAMABAD – The Supreme Court (SC) has rejected a stay against the Islamabad High Court’s (IHCs) judgement to restore the No Objection Certificate (NOC) for Park View City.
A two-judge tribunal consisting of Justices Muneeb Akhtar and Umar Ata Bandial conducting the hearing; Akhtar questioned the society on their ability to obtain the NOC, which was issued to housing societies after an SC decision in 2008, and Bandial issued the rejection on the grounds that IHC’s request was suspect. However, both judges accepted the appeal for future hearings.
The judges also instructed the Capital Development Authority (CDA) and the Chief Commissioner of Islamabad Capital Territory (ICT) to remove any installations or constructions attributed to the company on said land following a declaration from Chief Justice of IHC Athar Minhallahalso under the Ordinance of 1960.